If I asked you to name the Cubs pitcher who had the most success throwing high fastballs, your first inclination would probably be Yu Darvish. Maybe you’d go with Craig Kimbrel, who can still blow it by hitters when he’s not piping his heater middle-middle. But you, Dear Reader, have probably already discerned that the answer is the man who throws about 10 ticks slower than either of those two.

Kyle Hendricks isn’t just the best Cubs pitcher when it comes to working up in the zone with his fastball, he’s one of the best in all of MLB. While the results are based on some slightly esoteric data and a little bit of guesswork, FanGraphs’ Jeff Zimmerman stumbled upon some findings (please click, I’ll explain later) that stand up well to common logic. He found that pitchers with the highest percentage of fastballs thrown between 3.3 and 3.7 feet of vertical height in the zone have the most success on those pitches.

Any lower and hitters are able to square them up, any higher and the swing-and-miss rates go down because those pitches are being taken more. There’s also the matter of giving up more contact in the air, which is a real danger when you work up in the zone. In order to find out the optimal window in which to locate fastballs, Zimmerman cross-referenced swinging-strike and groundball rates with his pERA figures. Even if you don’t fully grasp everything that goes into the graph above, it makes sense that those pitchers who throw the highest percentage of fastballs in a portion of the zone that is essentially a black hole for hitters will have the most success. Hendricks is able to thrive with an 87 mph fastball because a whopping 19.5% of his four-seamers are in that 3.3-3.7 range, yielding a 13.3% swinging-strike rate that is significantly higher than his overall 10.3% mark last season.

Interestingly enough, Hendricks gets significantly more whiffs in that window than Dylan Cease (11.4%), whose 96 mph fastball spends 19.1% of its time there. The two otherwise disparate pitchers also have the same 3.1-foot average fastball height, so what gives with the big difference in whiffs? Quite simply, it’s a matter of deception. While Cease throws his fastball at a 52% clip, Hendricks is at just 22% and offsets it with an elite changeup he throws 28% of the time. 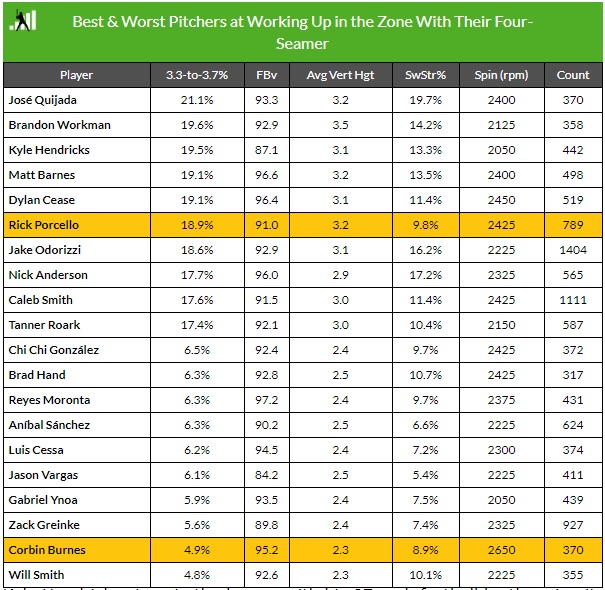 In other words, hitters can sit dead red on Cease and be right most of the time. The same isn’t true for Hendricks, hence the outstanding results despite a heater thrown slower than any other qualified pitcher in baseball last season. That may not be new information, per se, but it’s good to see some that the advanced data supports what Cubs fans have understood for several years.

What will be really interesting to see over time is whether pitchers, or perhaps pitching coaches, can use this information to push performance to a new level. Or whether hitters and hitting coaches can use it to address and eliminate weaknesses. That cat and mouse game will continue once baseball returns, at whatever point that may be.

Based on nothing more than my own suppositions and gut feeling, I would guess Hendricks is even better suited to stay ahead of his colleagues than most of the other pitchers on this list. While it’s unfair to say harder-throwing pitchers don’t operate with similar finesse, Hendricks’ cerebral style may allow him to more consistently work within the parameters Zimmerman defined.

This piece was obviously inspired by a FanGraphs post, but I was led to the site today in response to founder and CEO David Appelman’s appeal for help. FanGraphs has been invaluable to my work as a baseball “writer” and just to my general understanding of the game as a fan, but it’s feeling a big pinch as a result of baseball’s shutdown and is trying to drive memberships as ad revenue plummets.

Starting March 12, after the announcement that Opening Day would be postponed, we have seen a steep decline in our site traffic that has lead to a correspondingly dramatic decline in revenue. Every piece you read and tool you use at FanGraphs is free to access, but they all take money to create. We are a small business. We rely on the revenue generated by site traffic.

Appelman included a graph that illustrated year-over-year March traffic, in which you can clearly see a precipitous drop right when MLB postponed its season. That should come as no surprise, since no baseball means a decreased need to look up baseball statistics.

But if you want to see a really wild reversal of fortunes, check out Cubs Insider’s traffic for March of this year (dark blue) versus March of 2019. We were trending well above last year’s numbers until an inflection point on March 12, the day MLB officially announced its postponement, after which the results produce a nearly perfect mirror image. This isn’t to marginalize FanGraphs’ drop, since they actually employ several people and undoubtedly generate a good deal more revenue than CI. However, you can also see that their traffic was trending almost identically to last year, while ours was on pace to increase in a huge way over the final weeks of March. As a result, we’re at maybe 20% or so of where we’d otherwise have been.

Because we rely solely upon ad revenue generated by site traffic, the downturn has greatly impacted our bottom line. Even if we weren’t exactly raking in the kind of cash that pays for private jets and Ferraris — I mean, we’re not Bleacher Nation — the squeeze is real. Since we don’t have any membership tiers, I would just ask that you continue to read and engage, then share any interesting posts you find here via whatever external platforms you utilize.

That goes for other sports sites you frequent as well, since all of them are facing perilous futures with sports on hold indefinitely. The entire sportswriting industry has been thrown for a loop and it’s scary for a lot of people out there right now, but something as small as clicking and sharing can help. There’s still content being produced, so supporting that in whatever way you can is a way to keep it going until things get back to normal.