While Cubs Insider frequently features profiles of various prospects throughout the system, we recognized a need for a regular retrospective of the goings-on across the system. It’s a little late in the season to start such a thing, but minor league baseball is still in full swing and there’s plenty to discuss.

That said, let’s take a look at where the Cubs affiliates stand after this week.

The SB Cubs have had a rough stretch over the past couple weeks. They came into last week riding a four-game losing streak and were swept by West Michigan Whitecaps. During the sweep, the Whitecaps shut the Cubs out in two straight games.

The Cubs then opened up a three-game series against the Lansing Lugnuts dropping the first two games to push losing streak to eight. The Cubs were finally able to snap their skid in the final game with a 5-4 win. It was the Cubs’ first win since July 25.

Despite the overall futility, Austin Filiere hit .444 with one home run, two RBI, and four runs scored on the week. FIliere went 3-for 4-at the plate in back-to-back games.  Also, pitcher Ryan Williams — who missed most of the last two seasons due to rotator cuff issues — took the mound once last week and went seven scoreless innings, ginving up five hits and walking one while striking out six.

The Cubs currently sit in sixth place in the Midwestern League.

The Pelicans opened last week with two wins, but then went on to drop five straight. As far as the greater organization is concerned, though, the game results matter less than player development, and in that reguard it has been a great season in Myrtle Beach.

Standout performances from the Pelicans include the Cubs’ July Player of the Month, Jared Young, who earned the honor for the second straight month. Young batted .350 with four doubles, four homers and 17 RBI in July and also maintained a 21-game on-base streak.

Erick Leal was named the Cubs’ Pitcher of the Month for July. During his one start this week he went five innings, giving up three runs on four hits and striking out five. In the month of July, Leal pitched 22.2 scoreless innings over seven appearances and allowed only two runs. He struck out 25 while walking just one.

Cory Abbott also stood out for the Pelicans this week, going six innings and striking out five in his lone start.

The Smokies only got in four games this week due to rain, dropping the first three before bouncing back for a win on Sunday. One of the standout performers for the Smokies was catcher Ian Rice, who went 5-for-8 with one home run and two runs score.

Despite the outcomes, pitching was dominant for the Smokies. Matt Swarmer went six innings and gave up two runs on six hits while striking out seven. Micheal Rucker also had a solid start on Saturday, pitching six innings and ginving up one run on three hits with four strikeouts. He also went 2-for-2 and drove in a pair of runs.

The Smokies currently sit 4.5 games back in the Southern League North Division.

The I-Cubs played .500 baseball over the past week, paced by center fielder Trey Martin and spring training darling Ryan Court. Martin batted .325 this week with four RBI, four runs, and two stolen bases. Court hit .380 with one homer, eight RBI, five runs, and a stolen base.

The I-Cubs currently sit at 42-70 and in fourth place of the PCL’s American Northern division. 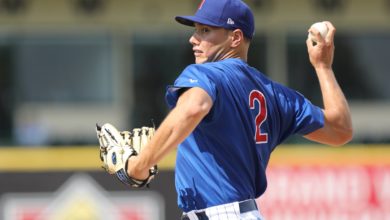 New Cubs Top 30 List from Prospects Live Has Miguel Amaya at No. 1